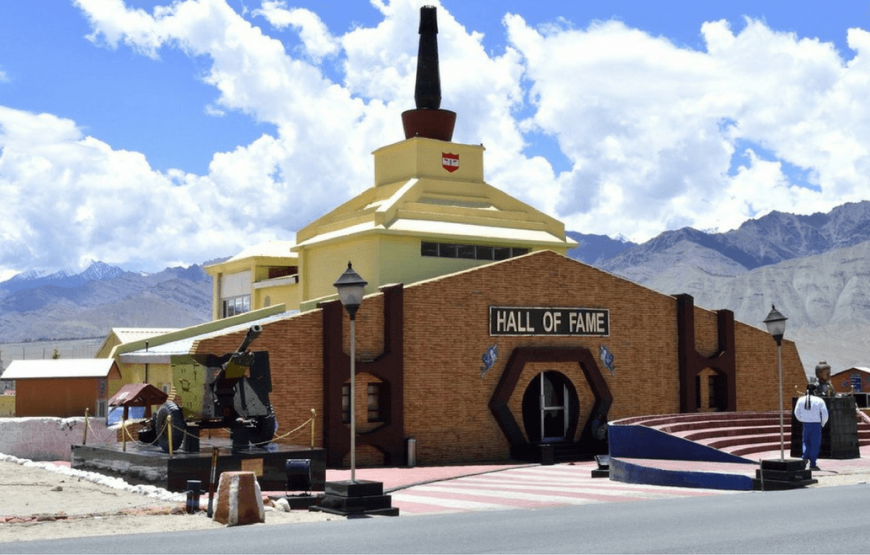 HALL OF FAME:
The Hall of Fame Leh is a museum that is constructed and maintained by the Indian army. Hall of fame is located near the Leh Airfield. This museum is built in memory of the soldiers who had lost their lives through the Indo-Pak wars. The building comprises of 2 floors and on the ground floor, there is information about the courageous soldiers. The Hall of Fame Museum also owns objects of various wars consist of weapons and documents. Another segment is devoted to the Siachen glacier. The top floor has guns and equipment that have been detained by the Indian Army during its battles with Pakistan Army. The museum owns the information that is related to Leh culture, way of life, history, vegetation, and animals origin in this part of the world. In-room no 15 will display clothes that were worn by soldiers at -50ÂºC. The hall of fame museum also includes a 30-minute film that comprises of 1999 ‘Kargil War’.
Tourist those are history lovers will have a great time in the Leh Hall of Fame. The museum is also known as the war of museum and it let you known about the rich culture and possessions of the city. The entrance of the Hall of Fame Museum is like a pyramid and it is a famous tourist attraction. The museum also portrays the glorious flora and fauna of Leh. Hall of Fame confines the important structures of Leh. The main reason for the attraction of the Leh Hall of Fame is that it portrays memorabilia, seized arms, and facilities of Pakistani Soldiers, profiles, and pictures of the brave soldiers. The museum displays objects related to Ladakhi’s cultural legacy. There are various sections that will explain different sides of the Ladakh region such as Biodiversity, culture, History of Ladakh. The place depicts the Kargil war but the war was won by the Indian army. It is surrounded by the beautiful and stunning landscape of mountains and vibrant deep blue heavens.

Things to see inside the Hall of Fame:
The Hall of Fame museum, consisting of two stories, is divided into various sections which contain several displays. On the upper floor, there is a section named OP Vijay Gallery. Here, you can see the various kinds of weapons used in the Kargil war, along with the various arms and ammunition captured by the Indian Army during the war. On the same floor, in yet another section, various kinds of apparel and amenities used by the Indian Army in the Siachen region have also been displayed. Some of these show the pictures of army posts on the glacier, living accommodation of the troops and the training process of the troops on ice walls, besides others.

If you head to another section of the same ground floor, you will find the pictures of the Kargil War on the walls. The pictures provide an elaborate and fascinating account of how the Indian Army fought the war. There is also a wall named “Lest We Forget” which displays the photographs of those soldiers who laid down their lives defending our nation. It’s a very moving sight to come across and reminds you of the enormous sacrifices made by our soldiers to ensure that our country is safe and secure from foreign aggression at all times.

On the same ground floor, there is also a projection room where you can watch a documentary on “Operation Vijay”. One particular moving sight on this floor meets you in the form of a frame on a wall named “The Last Post”. This was the letter written by Captain Vijayant Thapar to his parents some days before he attained martyrdom. Upon reading the letter, you are overcome by a profound sense of grief and pride, while your eyes well up with tears. You are reminded of the bravery and exemplary courage displayed by our soldiers while performing their service in the line of duty.

On the ground floor, there is a section that displays the history, culture, and other associated facts with Ladakh. It also consists of a souvenir shop where you can buy several items including t-shirts, caps, coffee mugs, and pashmina shawls, among others. You can also get a photoshoot clad in the Ladakhi attire in photoshop and get the prints after paying a small amount of money.

Spituk Monastery Located about 18km from Leh on Srinagar road, it offers magnificent views of the Indus River. Every year, the Gelukpa order of monks celebrates the Spituk Festival here.

Shanti Stupa is situated at a driving distance of about 5km from Leh City, the Shanti Stupa provides an amazing view of the surroundings. It consists of two stories, whereby the first story contains the Dharmchakra while the second story depicts various aspects of Lord Buddha’s life.

Leh Palace is one of the foremost attractions of Leh Ladakh and is located about 6km from the Hall of Fame museum. Built-in medieval Tibetan architectural style, it’s home to 450 years old artifacts, murals, and other important souvenirs.